Words to liven up the month of July 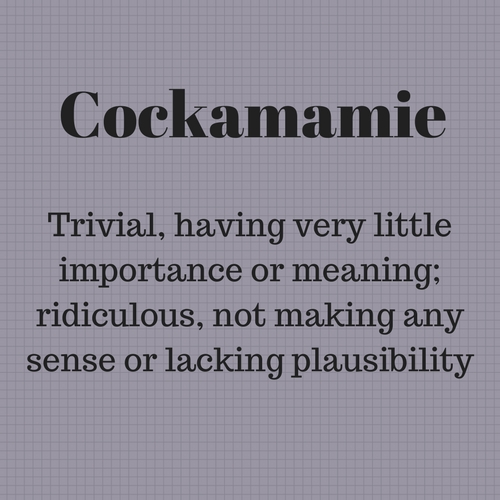 • cockamamie = trivial, having very little importance or meaning; ridiculous, not making any sense or lacking plausibility

• fete = a large elaborate party, often outdoors; a holiday or day of celebration; a religious festival, e.g. a saint’s day; VERB: to entertain or honor somebody with an elaborate party

• nares = nostrils, openings or passages leading out of the nose or nasal cavity. Most vertebrate animals have paired external nares, the nostrils, and a pair of internal nares opening into the mouth.

• obloquy = censure, statements that severely criticize or defame somebody; a state of disgrace brought about by being defamed

• putative = generally accepted, generally believed to be or regarded as being something; thought to exist, believed to exist now or to have existed at some time

• A Pyrrhic victory is a victory that inflicts such a devastating toll on the victor that it is tantamount to defeat; winning a lesser objective but overlooking and thus losing the larger objective, “winning a battle but losing the war;” gaining little in a battle, a “hollow” or “empty” victory. Pyrrhic victory is named after king Pyrrhus of Epirus, whose army suffered irreplaceable casualties in defeating the Romans at the Battle of Heraclea in 280 BC and the Battle of Asculum in 279 BC, during the Pyrrhic War. After the latter battle, Plutarch relates in a report by Dionysius: “The armies separated; and, it is said, Pyrrhus replied to one that gave him joy of his victory that one other such victory would utterly undo him. For he had lost a great part of the forces he brought with him, and almost all his particular friends and principal commanders; there were no others there to make recruits, and he found the confederates in Italy backward. On the other hand, as from a fountain continually flowing out of the city, the Roman camp was quickly and plentifully filled up with fresh men, not at all abating in courage for the loss they sustained, but even from their very anger gaining new force and resolution to go on with the war.” — Plutarch, Life of Pyrrhus. In both Epirote victories, the Romans suffered greater casualties but they had a much larger pool of replacements, so the casualties had less impact on the Roman war effort than the losses of King Pyrrhus. The report is often quoted as “Ne ego si iterum eodem modo uicero, sine ullo milite Epirum reuertar.” Another such victory and I come back to Epirus alone. —Orosius or “If we are victorious in one more battle with the Romans, we shall be utterly ruined.” —Plutarch

• salubrious = beneficial to or promoting health or well-being