Wedding Toast for Aaron and Helena Auberg by Harvey Bluedorn

by Laurie Bluedorn | About Our Family, Wedding Plans | 3 comments 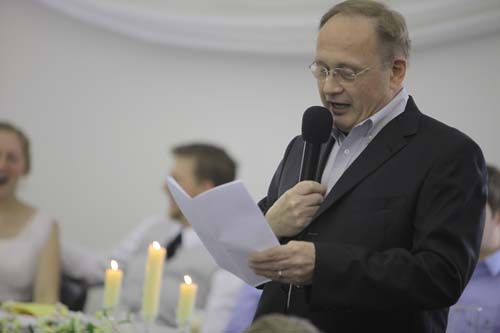 Well, here we are again. We welcome all of our friends, and we welcome the friends of Mark and Twyla, and the Auberg family. Here, together, we can all share our joy for Aaron and Helena.

Let me tell you a little about how we got here. Long ago was born to us a little girl whom we named Helena. For the first year of her life, she was the perfect child. No fuss, no mess, no bother. We hardly noticed that she was around. But as soon as she began to talk, things began to change.

There was one particular incident that happened … maybe in her third year … which served to warn us of things to come. She exhibited what is called “the Christian doctrine of total depravity” by demonstrating that cursing comes naturally – even from the mouth of a child. I am certain that she had never heard any such expression until that fateful day when quite unexpectedly, in a moment of frustration, she clenched her fists, drew her breath, and formed the following expression on her lips, “Poop and Potty,” with emphasis on the p’s. From the mouth of babes. I am sure you are all aware of more colorful ways of saying this, but you must admit that, with her limited vocabulary, Helena did exhibit amazing creativity. At least we could be sure that Helena knew how to express herself. And you could summarize the remainder of her life by simply saying that she has never been at a loss for words. She has grown up to be a faithful and a beautiful woman. What’s not to like about her?

About a year ago, after a long line of suitors, this guy named Aaron finally pops up on the list. By this time I had somewhat perfected my techniques for cross-examination. I would take suitors up into my study, which became affectionately known as the interrogation chamber. In my study, there are nine flood lights attached to the ceiling which I had focused on the chair where the young man would be seated, while I would sit in the dark and would direct questions at him which would surreptitiously penetrate into the inner psyche of the suspect – I mean, the suitor – until he would crack and spill his guts into the hidden microphone. Then I would erase his memory of the entire incident by means of suggestive hypnosis. You don’t remember any of this do you, Aaron? [Aaron answers, “I have no recollection.”] See what I mean.

Seriously, it is the burden of every suitor to prove himself an honorable and worthy man. Aaron took on that burden actively and willingly, and Mark and Twyla have every reason to boast of God’s goodness to them in giving them such a fine son, and we thank God for Mark and Twyla for giving this man life, and for guiding his life until God brought him into our lives to bless us, and especially to bless our daughter Helena.

Now Aaron, we don’t want you to get a big head here, so let me make it plain that I never said you were perfect, I only said you were ”good enough.” Aaron has earned my full respect and a whole lot more, and then he has won my daughter’s love, and we welcome him into our family.

Now comes the lecture which is directed to Aaron and Helena, but you can all listen in.

The Bible tells us all to love one another and to submit to one another. But the Bible also singles out husbands to tell them to love their wives, and it singles out wives to tell them to submit to their husbands. Why is this? I think the answer is found in two other things the Bible says exclusively of husbands, and exclusively of wives, respectively.

Husbands are to honor their wives. This has nothing to do with how valuable wives are to their husbands. It has everything to do with how valuable wives are in themselves: in their position as companions of their husbands for life under God. She is your wife. She deserves for you to display honor toward her simply for who she is. God brought her to you to be your companion. Honor her for what she is, God’s gift to you. If you do not honor the gift, you will insult the Giver.

Second, the Bible says that wives are to respect their husbands. (Ephesians 5:33; 1 Peter 3:2) Actually, the word translated respect is literally “fear.” Now we read elsewhere (1 Peter 3:6) that this fear is to be without intimidation or terror. It’s not that kind of fear.

We are to fear God, that is, we are to pay Him due regard, to look to Him for direction and instruction, to listen to what he says so that we may know what to do. Fearing God means heeding His Word.

We are to fear our parents, that is, we are to pay them due regard, to look to them for direction and instruction, to listen to what they say so that we may know what to do. Fearing our parents means heeding their word.

Of course these things are often tempered with other considerations, but this is the principle.

Now let’s get back to where we began.

A wife is to regard her husband, and that’s what submission is to the wife. Submission is regard to the maximum. Regard which listens to what her husband says so that she may know what to do.

So the difference between honor and regard is simply the gender of the love.

Now these are the principles, and they are quite simple. It’s the practical working out of these principles which makes life … interesting. How does a man honor his wife? How does a woman regard her husband? I’m afraid we’re still working on the answers to that. But here’s a hint. A husband’s love reaches down to lift, reaches over to draw in. A wife’s regard reaches up to be lifted, reaches out to be drawn. And you have begun this dance on this your happy day.

A toast to Aaron and Helena Auberg, partners for life: may God bless them richly with fruits of providence and grace.