Once I have learned enough Koine Greek so that I can begin reading the New Testament in Greek, what bible/translation do you recommend? For instance, in English there is KJV, ESV, etc. Is that true in the world today for Greek Bibles? I have heard of the Septuagint. My goal is to learn Greek so that I can go back to the “real Greek” to study it instead of an English translation. Do you have any suggestions? Thank you! Tina

Before printing was available, the Greek New Testament was copied by hand, and these ancient hand-written copies (manuscripts) are our sources for the wording of the New Testament. When we compare the wording of these many ancient manuscripts, we find that they are not all identical — they vary in wording from matters as small as the addition, alteration, or omission of a single letter to matters as large as the addition, alteration, or omission of several paragraphs.

Here in brief is my personal perspective on evaluating the variations in how different manuscripts read:

(1) We approach the manuscripts from a believing perspective — not a purely skeptical perspective.

(2) We consider all of the manuscript evidence — not a narrowly selected portion of the evidence.

(3) We evaluate the manuscripts employing Biblical rules for evidence — not merely naturalistic rules.

If we approach the many manuscripts of the Scriptures merely from a skeptical, selective, and naturalistic perspective, then we cannot avoid having results which will reflect these values. However, if we approach the manuscripts of the Scriptures believingly, comprehensively, and Biblically, then we will have results which will reflect these values. This does not rule out sanctified skepticism, selectivity, and objectivity, but it does put these things under subjection to genuine faith, actual evidence, and sound Biblical rules.

There are perhaps dozens of approaches to determining the correct reading of a passage of Scripture. For various reasons, some persons favor the readings of certain manuscripts, others favor certain techniques for evaluating particular readings among the manuscripts, and still others combine certain manuscripts with certain techniques. And there are other things which people do with the manuscripts. As far as readily accessible editions of the Greek New Testament are concerned, we can narrow the approaches down to three: (1) the Selective Majority Greek Text, (2) the Eclectic Minority Greek Text, and (3) the Traditional Greek Text.

1. Selective Majority Greek Text — With the purpose of correcting and purifying the text according to more objective standards of evidence, editors from this approach have selected readings primarily from among a very large majority of manuscript witnesses which are homogenously spread out over time and space, history and geography. The primary representatives of this approach include:

These two editions have similar though not identical texts and notations.

2. Eclectic Minority Greek Text — Editors from this approach have freely gathered readings from diverse sources, but primarily from a very small minority of manuscript witnesses which are greatly restricted in historical time and geographical space, and from this they have composed a patchwork text from otherwise unrelated pieces and fragments — and even from conjectures — according to much more subjective rules of evaluation. The primary representatives of this approach include:

These two editions have agreed to publish virtually identical texts, but different notations. There are several other editions, but a third can be mentioned here:

Instead of recording differences in Greek manuscripts, the SBL edition records differences among other published editions of the Greek New Testament — namely: Tregelles (1857-1879), Westcott and Hort (1881), the Greek text behind the NIV by Goodrich and Lukaszewski (2003), and Robinson and Pierpont (2005).

3. Traditional Greek Text — Editors from this approach gathered and selected readings from texts available to them in the sixteenth and early seventeenth centuries. The printed editions which are in this set (various editions of Erasmus, Stephanus, Beza, and the Elzevirs) are now four to five centuries old, they differ very little between themselves, and since they are printed editions, they are no longer subject to noticeable change. Stephanus 1550 is one of the chief representatives of this group of printed texts, and it is readily available in printed and electronic formats.

I believe the Selective Majority Greek Text approach comes closer to a faithful, objective, and sound approach to determining the correct reading of a passage. However, many of the ancient manuscripts have never been fully examined and compared for agreements and differences (that is to say, they have never been fully collated), so these efforts are necessarily incomplete at this time.

There is much more which can be said on the issue of different texts and manuscript readings of the New Testament.

Almost all scholarship today is based on the Eclectic Minority Greek Text.

I hope this is helpful. 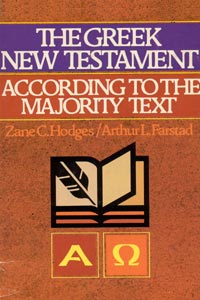