Logic: Having a Brainstorm

Brainstorming is a process creative people use to invent an idea, find a solution to a problem, or answer a question.

Decorating the bathroom
Figuring out what points to make in an article – like this one
And, generating ideas for a science fair project

Brainstorming can even be used to solve big problems, like the problem of world terrorism….

Mr. President: Ok, we’re here to decide how to protect our nation from terrorists. Any ideas?
Sec. of Interior: What if we closed down all our national parks and monuments so the terrorists couldn’t get in and hurt them?
Sec. of Transportation: And closed all the roads, and ports, so the terrorists can’t get out.
Sec. of Energy: But then I wouldn’t be able to get to work in the morning.
Sec. of Labor: I think the best way to protect us from terrorism is to make it so the terrorists can’t terrorize us. Does anybody agree?
Sec. of Education: What about a contest for children from across the country to sew a big “Protect Us From Terrorism” quilt?
Mr. President: Intriguing ideas. Does the Secretary of Defense have anything to say?
Sec. of Defense: These donuts are good!

When brainstorming, every idea does not have to be a good idea. In the President’s brainstorm, most of the ideas were not good ideas. But the President should keep encouraging ideas until there is success.

Here are a few steps which might help us brainstorm.

First we define the problem we want to solve. Let’s say your son is going to enter a science fair, and he needs a project idea.

Bingo: What should I do my science fair project on?
Dad: Let’s come up with some ideas.

Next, you need to chose a time for your brainstorm. It is best to do brainstorming during the most productive time of the day. Good ideas often come in surges, so you should try to brainstorm when a surge is likely. 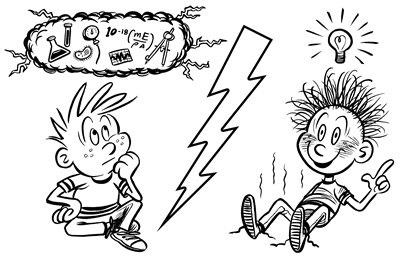 Next, everybody should start suggesting ideas. The object of brainstorming is to produce as many ideas as we can. There should be no pressure on the barnstormers to make every idea a “brilliant” one.

Hans: What should we write our article on?
Nathaniel: Maybe we could do it on the philosophical ramifications of the Platonian view of universal forms?
Hans: You’ve been listening to those philosophy tapes too much.
Nathaniel: Brainstorming rule number three says you can’t be critical of other people’s ideas.

It is forbidden to criticize other people’s ideas. Just because somebody says an idea, that doesn’t mean you have to do it (thank goodness).

Bingo: I want to do my project on something I am interested in.
Dad: You play a lot of paintball. What about doing something with that?
Bingo: How about “how to make a paintball gun more accurate?”
Dad: Or “how to make it shoot farther?”

Often, brainstorming as a group is better than by yourself because more ideas can be produced. However, if nobody is coming up with ideas, it my help to encourage things by suggesting some wild and humorous ideas.

Bingo and his dad should keep suggesting ideas until they have a lot.

This is a very important part of brainstorming. Assign somebody to be secretary. His job is to write down every idea – that way, good ideas will not be lost.

Dad: Here are the ideas we have: 1) How to make a paintball gun more accurate. 2) How to make it shoot farther. 3) What breed of guinea pig bites their owners the most? 4) How far do different kinds of rubber bands stretch before breaking? 5) Disproving Einstein’s theory of relativity.
Bingo: You forgot one idea: not doing a science fair project at all.
Dad: That’s out of the question.

While some of these ideas seem impractical, it isn’t always obvious you have a good idea until later. That’s why you need to write everything down. Sometimes, people will use post-it notes to write each idea, sticking them on the wall.

The next step is to categorize the ideas you have and decide which ones are the best.

Another part of brainstorming is improving ideas. For example, “how to make a paintball gun more accurate” might change to “what factors reduce paintball accuracy.”

After categorizing their ideas, Bingo should wait a day before deciding which one is best. Hopefully by then one of Bingo’s ideas will have matured enough to be a really good science fair project idea. Remember, nearly every great idea started with a brainstorm. . .

Sir Arthur: I’m writing a story about a detective, but I don’t know what to call him. Any ideas?
Charles: Is he smart?
Sir Arthur: Very smart. He can figure out everything about you just by looking at you – then he say’s it’s “elementary.” He can solve the most difficult of crimes with only minor clues. He can even break into a house without leaving a trace.
Charles: “Detective Watson” has a good ring to it.
Sir Arthur: Can’t, I already used that name.
Charles: He can break into homes, you say. The other characters would do well to be sure they locked their homes.
Sir Arthur: Yes, they should be sure to lock their homes.
Charles: I have an idea. . .