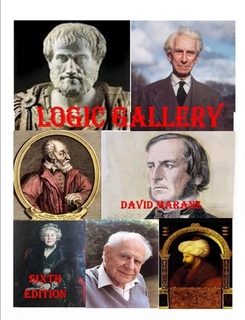 David Marans’ Logic Gallery is a chronologically ordered collection of quotations on logic from the most important thinkers in western civilization — starting with Aristotle and ending with Tim Williamson. Each entry has one or two quotations from the works of that particular logician, a short bibliography, a portrait, a short biography, and a link to a longer biography with some discussion of his basic teachings. This isn’t a history of logic or a discussion of different philosophies but is an interesting compilation of facts about logic.

Here are some sample quotes —

In correct logic, certain things are supposed, and something else results of necessity. –Aristotle

To follow the scent of an animal, the hunting dog uses this logic: “The animal went either by this road, or by that, or by the other: but it did not go by this nor that, thus it went the other way.” –Chrysippus

To fly from logic is to be a true fugitive. –Marcus Aurelius

This, therefore, is Logic: She reminds you of the invisible form of the soul; She gives light to her own discoveries; She awakens the mind and purifies the intellect; She brings light to our intrinsic ideas; She abolishes oblivion and ignorance which are ours by birth. –Proclus Diadochus

Some concepts (truth, being, necessity) cannot be clarified beyond the clarity of the concepts themselves. For all other concepts, Logic is the science of the methods by which we acquire them. –Al-Farabi

Logic is the science of the forms of thinking that are valid and the forms that are invalid. –Ibn Sani

There is no other way to learn the truth than through Logic. –Averroes

Logic is the beginning of wisdom. –Thomas Aquinas

Those who establish argument by noise and command show that their reason is weak. –Michel de Montaigne

With logic, judgment, and invention, a person may do great matters. –Francis Bacon

The best defense against logic is ignorance. –Blaise Pascal

Logic is the anatomy of thought. –John Locke

This art of logic concerns all kinds of reasoning in which inferences are executed by their form. –Gottfried Leibniz

Logic is the art which directs the mind in its acquisition of knowledge. –Frances Hutcheson

Logic helps us to strip off the outward disguise of things, and to behold and judge them in their own nature. –Isaac Watts

or you can purchase the print version.