Let us cry, then, for special strength

Now Amalek came and fought with Israel in Rephidim. And Moses said to Joshua, “Choose us some men and go out, fight with Amalek. Tomorrow I will stand on the top of the hill with the rod of God in my hand.” So Joshua did as Moses said to him, and fought with Amalek. And Moses, Aaron, and Hur went up to the top of the hill. And so it was, when Moses held up his hand, that Israel prevailed; and when he let down his hand, Amalek prevailed. But Moses’ hands became heavy; so they took a stone and put it under him, and he sat on it. And Aaron and Hur supported his hands, one on one side, and the other on the other side; and his hands were steady until the going down of the sun. So Joshua defeated Amalek and his people with the edge of the sword.

So mighty was the prayer of Moses, that all depended upon it. The petitions of Moses discomfited the enemy more than the fighting of Joshua. Yet both were needed. So, in the soul’s conflict, force and fervour, decision and devotion, valour and vehemence, must join their forces, and all will be well. You must wrestle with your sin, but the major part of the wrestling must be done alone in private with God. Prayer, like Moses’, holds up the token of the covenant before the Lord. The rod was the emblem of God’s working with Moses, the symbol of God’s government in Israel. Learn, O pleading saint, to hold up the promise and the oath of God before him. The Lord cannot deny his own declarations. Hold up the rod of promise, and have what you will.

Moses grew weary, and then his friends assisted him. When at any time your prayer flags, let faith support one hand, and let holy hope uplift the other, and prayer seating itself upon the stone of Israel, the rock of our salvation, will persevere and prevail. Beware of faintness in devotion; if Moses felt it, who can escape? It is far easier to fight with sin in public, than to pray against it in private. It is remarked that Joshua never grew weary in the fighting, but Moses did grow weary in the praying; the more spiritual an exercise, the more difficult it is for flesh and blood to maintain it. Let us cry, then, for special strength, and may the Spirit of God, who helps our infirmities, as he allowed help to Moses, enable us like him to continue with our hands steady “until the going down of the sun;” till the evening of life is over; till we shall come to the rising of a better sun in the land where prayer is swallowed up in praise. 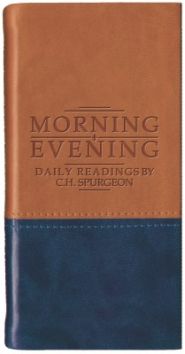