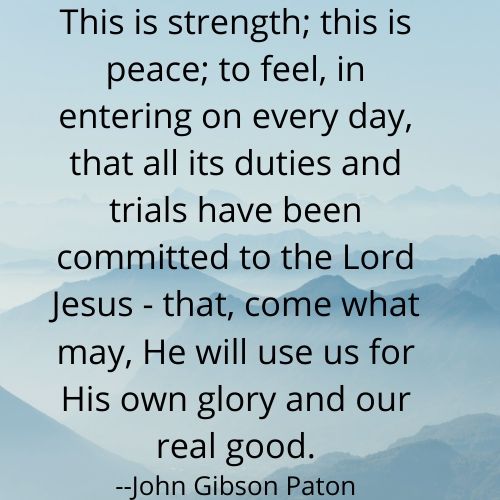 Taken from John G. Paton: The Autobiography of the Pioneer Missionary to the New Hebrides

, an autobiography edited by James Paton. This passage describes John’s departure for Glasgow to begin his missionary internship.

My dear father walked with me the first six miles of the way. His counsels and tears and heavenly conversation on the parting journey are as fresh in my heart as if it had been but yesterday. Tears are on my cheeks as freely now as then whenever memory steals me away to the scene. For the last half mile or so we walked on together in almost unbroken silence, my father, as was often his custom, carrying hat in hand while his long flowing yellow hair — then yellow, but in later years white as snow — streamed like a girl’s down his shoulders. His lips kept moving in silent prayers for me and his tears fell fast when our eyes met each other with looks for which all speech was vain. We halted upon reaching the appointed parting place. He grasped my hand firmly for a minute in silence and then solemnly and affectionately said, “God bless you my son. Your father’s God prosper you and keep you from all evil.” Unable to say more, his lips kept moving in silent prayer. In tears we embraced and parted.

I ran off as fast as I could and when about to turn a corner in the road where he would lose sight of me, I looked back and saw him still standing with his head uncovered where I had left him, gazing after me. Waving my hat in adieu, I was around the corner and out of sight in an instant, but my heart was too full and sore to carry me further, so I darted into the side of the road and wept for a time. Then rising up cautiously, I climbed the dike to see if he yet stood where I left him, and just at that moment I caught a glimpse of him climbing the dike and looking out for me. He did not see me and after he had gazed eagerly in my direction for a while he got down, set his face toward home and began to return. His head still uncovered and his heart, I felt sure, still rising in prayers for me.

I watched through blinding tears till his form faded from my gaze and then hastening on my way, vowed deeply and oft by the help of God to live and act so as to never grieve or dishonor such a father and mother as He had given me. The appearance of my father when we parted, his advice, prayers and tears, the road, the dike, the climbing up on it and walking away head uncovered, have often, often, all through life risen vividly before my mind… The scene, not only helped by God’s grace to keep me pure from the prevailing sins, but also stimulated me in all my studies that I might not fall short of his hopes, and in all my Christian duties that I might faithfully follow his shining example.

John Gibson Paton (24 May 1824 – 28 January 1907) was born at Braehead, Kirkmahoe, Dumfriesshire, Scotland, and was the oldest of the eleven children of James Paton, a peasant stocking-maker, and Janet Jardine Rogerson. Both parents were of the Reformed Presbyterian Church of Scotland. John learned from his youth that prayer was to be involved in every part of life. Before John or his siblings were ever punished for an act of disobedience, his father first got on his knees and prayed. This taught them the importance of inviting God into every area of life.

“How much my father’s prayers at this time impressed me I can never explain, nor could any stranger understand. When, on his knees and all of us kneeling around him in Family Worship, he poured out his whole soul with tears for the conversion of the Heathen world to the service of Jesus, and for every personal and domestic need, we all felt as if in the presence of the living Savior, and learned to know and love him as our Divine friend.”

John was a Christian missionary to the cannibals on the New Hebrides Islands of the South Seas. His life was filled with many trials — his first wife and their child soon died after their arrival on the island of Tanna, and Paton had to flee for his life almost on a daily basis from the natives.

Working among the cannibals

John helped treat the Aniwans with proper medicine for their illnesses and dug a well in the middle of the island so that the people could have fresh water. 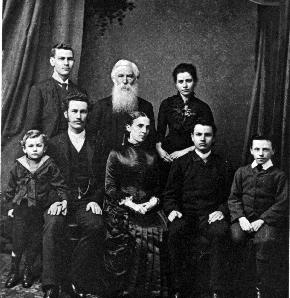 John Paton lived to be eighty-three, and the Lord’s promise never failed him.