Is it too late for John?

My husband and I recently adopted my sixteen-year-old nephew. This is a likable young man who does not get into trouble, is easy-going, and has been raised as a Christian. He has, however, quite possibly the laziest mind I have ever seen. I suspect that when he was being raised, television and videos served as a convenient babysitter. He will, if left to his own devices, literally remain in front of the television watching programming or playing video games for four or five hours at a time. He puts an absolute minimum effort into his schoolwork, and is as fond of reading as a cat is of water. I have been troubled about this for quite some time.

Lately, however, things have come to a head. He is a junior, and, in the process of writing a paper, heavily plagiarized from the encyclopedia. Other than the plagiarized material, the paper had pitifully little content. When I realized what he had done, I confronted him about it. He freely admitted to doing so. Now obviously, this is a guileless young man, as there was not only no attempt made at deception in that he asked me to proofread his paper, but he freely admitted to doing what he did and acknowledged that he knew it was wrong.

I have no doubt that if in fact this young man does ever attain to a level of academics at which he would be able to attend college, that the resulting expectations will hit him like a fast-moving freight train. But what concerns me even more is the complete lack of connection between character, principles, and honesty in schoolwork as tenets of his Christian faith. John has what I have come to think of as a water-bug mentality: skimming along on the surface, exerting a minimum of effort in all that he does. If something demands effort, he will sooner or later lose interest.

So, it was as if the scales fell from my eyes today when I began surfing the web and discovered information about classical education. I don’t know whether to laugh or cry! How we have cheated ourselves over the last fifty or sixty years in the name of public education!

So having said all that, my question is this: is it too late for John? Are there in fact remedial approaches to the Trivium that I could try to apply in a belated attempt to salvage this young man’s mind?! I would be ever so grateful of any advice, books, curricula, or approaches you could recommend. Understand, I am not looking for a quick fix-but I figure anything is better than nothing. Please help me to help John!

There seems to be some evidence that children who spend large amounts of time in front of a screen will have less time for parent-child interaction, reading, and playtime, which will, in turn, interfere with development of creativity, imagination, and intelligence.

In addition, it’s not so much what the child watches, but that he watches. In other words, it’s the actual watching which interferes with the physiological development of the neural connections in his brain. It doesn’t so much matter what the content is, whether Mr. Rogers Neighborhood or one of the Star Wars movies.
————-
Taken from Limit TV

1. In “Effects of Preschool Television Watching on First-Grade Children,” the authors report: (a) that the more preschoolers watch TV, the less well they do academically in the first grade; (b) the more preschoolers watch TV, the less well-socialized they are in the first grade. (Burton, Sydney G., James M. Calonico and Dennis R. McSeveney, “Effects of Preschool Television Watching on First-Grade Children,” Journal of Communication, Summer 1979, pp. 164-170.)
2. Jerome L. Singer and Dorothy G. Singer conducted field studies on children to see if TV can stimulate imaginative play. They subjected four groups of children to different types of classroom situations; two incorporated TV into the sessions, one was a control with no TV, and the last had no TV but an adult present to stimulate imaginative play. The greatest increase in imaginative play occurred with the last group, no TV but an adult present to engage the children. (Singer, Jerome L. And Dorothy G. Singer, “Can TV Stimulate Imaginative Play?” Journal of Communication, Summer 1976, pp. 74-80.)
3. In “Turned-on Toddlers,” Halpern writes about the potential over-stimulation of young children that may result from watching TV. This over-stimulation may tax their still-developing neurological systems, and that may result in a short attention span and hyperactivity. (Halpern, Werner L., “Turned-on Toddlers,” Journal of Communication, Autumn 1975, pp. 66-70.)
—————-
The good news is that “…teens’ brains are still growing and changing. In fact, a key part of the brain that affects judgment may not be in place until men and women reach their early 20s… .”

In other words, if the young man is willing to work and you are willing to help him, progress can be made to get his brain in shape. Perhaps a few of our suggestions will help you.

1. Read. Read to him and have him read to himself. Start with books which are easier to understand and progress from there. If he likes fiction, you could try I Want My Sunday, Stranger by Patricia Beatty, The 21 Balloons by William Pene DuBois, or Incident at Hawk’s Hill by Allan W. Eckert. Chances are, he will prefer nonfiction, in which case you can use the library to find books on the topics which interest him.
2. Help him develop a hobby or home business.
3. Learn logic. The Fallacy Detective is a good place to start.
4. Start doing a community service project such as visiting the local nursing home, shovel snow for the elderly, or pick up trash on the roadside. Help him turn his mind away from himself and on to others in need.
5. Require him to write something every day, even if it is only a paragraph or two. You might consider purchasing one of the many fine writing curricula which are available to homeschooling families.
6. Help him develop the habit of having regular private Bible study and prayer time.
7. Hard work and chores around the house will be a great benefit to him.
8. You will probably want to work out a program for limiting screen time.

This is only a start. After you have made some progress, you can add more academic subjects.

TV rots the senses in the head!
It kills the imagination dead!
It clogs and clutters up the mind!
It makes a child so dull and blind.
He can no longer understand a fantasy,
A fairyland!
His brain becomes as soft as cheese!
His powers of thinking rust and freeze!

from Charlie and the Chocolate Factory by Roald Dahl 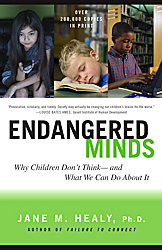