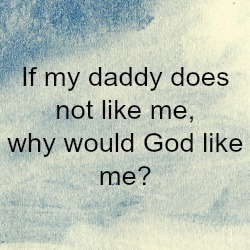 In the end, Emily did not want to tell me how her husband was a big culprit in Sara’s rebellion because Emily felt hopeless that Ryan would ever change. Rather than being honest to me about the situation, she presented it as teen rebellion and wanted me to fix her daughter….

Emily said Ryan rarely encourages his daughter. Though their home is not overly negative or discouraging, it is not a home where active and intentional building up and encouragement takes place….

Then she hesitated, but finally said softly that her daddy rarely encouraged her and how she always felt he was displeased with her. She did clarify how many times it was not necessarily because of what he said, as much as it was about his quietness, distance, pre-occupation, and obvious affection for Michael….

The reason Sara rebelled was because it was her way of working through her struggle with God. She did not know how to have a relationship with God because the main authority figure in her life–her father–was broken….

Sara felt her dad’s displeasure and naturally assumed God’s displeasure. “If daddy does not like me, God must not like me either. There must be something wrong with me.” She believed God was angry with her. From her perspective, it was like being thrown in a room with an angry person, so Sara became angry too….