Over the years we have read numerous books by Howard Pyle, and I would like to share with you some of our thoughts on these most exciting and interesting volumes. We were first introduced to Pyle by reading Men of Iron

(first published in 1891). This book is historical fiction at its finest. The time is 1400, the place is England under King Henry IV. Our children were young when we first read Men of Iron, and we reread it several times. Mr. Pyle writes in an intense, moving style, holding his readers captive with every word. You can find the audiobook here

Otto of the Silver Hand

This tale that I am about to tell is of a little boy who lived and suffered in those dark middle ages; of how he saw both the good and the bad of men, and of how, by gentleness and love and not by strife and hatred, he came at last to stand above other men and to be looked up to by all.

The final chapter of this one is especially exciting, so don’t be tempted to read the ending first! Audible

The Story of the Champions of the Round Table

, The Story of the Grail and the Passing of Arthur

, The Story of King Arthur and His Knights

, Pepper and Salt, or, Seasoning for Young Folk

, and The Wonder Clock

are more of Howard Pyle’s works.

Let me end with two of his books we have most recently read. The Rose of Paradise

: Being a detailed account of certain adventures that happened to Captain John Mackra, in connection with the famous pirate, Edward England, in the year 1720, off the island of Juanna in the Mozambique Channel; writ by himself, and now for the first time published (published 1894). It’s a long title that pretty much describes the plot of the book. And lastly, my favorite Howard Pyle book, which we never knew even existed till I saw it at an old book store — Within the Capes

(1885). This is the story of Captain Tom Granger, a Quaker, and his adventures in the year 1812. It is a combination of Robinson Crusoe, pirates, romance (Quaker style), and seafaring adventure. 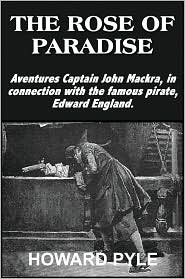