The Soldier’s Pocket Bible (also called Cromwell’s Soldier’s Bible) is a booklet that was first issued by Oliver Cromwell in 1643 during the English Civil War for the use of the Commonwealth Army. The little book consists of Bible passages (taken from The Geneva Bible

), arranged topically, which might be of most help to a soldier. It was later re-issued in 1861 at the very beginning of the American Civil War — an exact reproduction of the 1643 edition. The quote on the title page, “Trust in the Lord and keep your powder dry,” was Oliver Cromwell’s famous battle cry to his troops.

This Soldier’s Pocket Bible was usually buttoned on the inside waistcoat, placed near the heart, and under the soldier’s outer coat. English Puritan Richard Baxter relates a story that the life of one of Cromwell’s soldiers was saved by his carrying a copy of the Soldier’s Pocket Bible near his heart. A bullet fired at him became lodged in the pamphlet instead of his heart.

This PDF consists of 4 – 8.5 X 11 pages which you can print out double-sided (making 2 pieces of paper printed on both sides). You can then cut the sheets width-wise and assemble to make a 16-page 4.25 X 5.5 folded booklet. 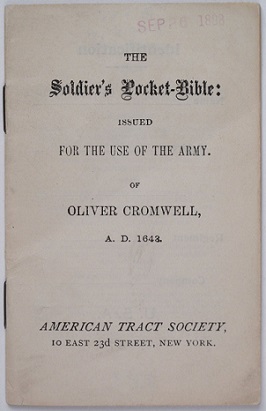