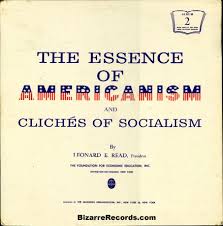 Clichés of Socialism
by various authors, published in 1970 by the Foundation for Economic Education

“When a devotee of private property, free market, limited government principles states his position, he is inevitably confronted with a barrage of socialistic clichés. Failure to answer these has effectively silenced many a spokesman for freedom.

Here are suggested answers [go to web site] to some of the most persistent of the “Clichés of Socialism.” These are not the only answers or even the best possible answers, but they may help someone else develop better explanations of the ideas on liberty that are the only effective displacement for the empty promises of socialism.”

1. “The more complex the society, the more government control we need.”

2. “If we had no social security, many people would go hungry.”

5. “Too much government? Just what would you cut out?”

6. “The size of the national debt doesn’t matter because we owe it to ourselves.”

8. “The free market ignores the poor.”

9. “Man is born for cooperation, not for competition.” or “The idols of the market place must yield to those of humanity.”

10. “Americans squander their incomes on themselves while public needs are neglected.”

11. “Labor unions are too powerful today, but were useful in the past.”

12. “We have learned to counteract and thus avoid any serious depression.”

14. “Employees often lack reserves and are subject to ‘exploitation’ by capitalist employers.”

15. “Competition is fine, but not at the expense of human beings.”

18. “Customers ought to be protected by price controls.”

19. “The welfare state is the best security against communism.”

22. “We believe in presenting both sides.”

23. “If free enterprise really works, why the Great Depression?”

24. “Federal Aid is all right if it doesn’t bring Federal control.”

25. “The United States Constitution was designed for an agrarian society.”

27. “Individual workers are too weak to bargain with corporations.”

30. “The government can do it cheaper because it doesn’t have to make a profit.”

31. “If government doesn’t relieve distress, who will?”

33. “We can have both guaranteed jobs and freedom of choice.”

35. “The problem of production has been solved.”

36. “Business is entitled to a fair profit.”

38. “We’d rather have surpluses than shortages.”

40. “Without legislation, we’d still have child labor and sweatshop conditions.”

41. “Businessmen should work for the good of others.”

43. “No one must profit from the misfortune of others.”

44. “A worker should be paid according to his productivity.”

45. “The Shylock! He charges all the traffic will bear!”

50. “Nobody is worth a million dollars.”

57. “Fact-finding is a proper function of government.”

58. “Government should control prices, but not people.”

59. “REA is a fine example of private enterprise.”

67. “Government should guarantee freedom from want.”

68. “Equality should be enforced by law.”

71. “Speculation should be outlawed.”

74. “Every employee is entitled to a fair wage.”

76. “What this country needs is Creative Federalism.”