Christian and Hopeful under the power of Giant Despair 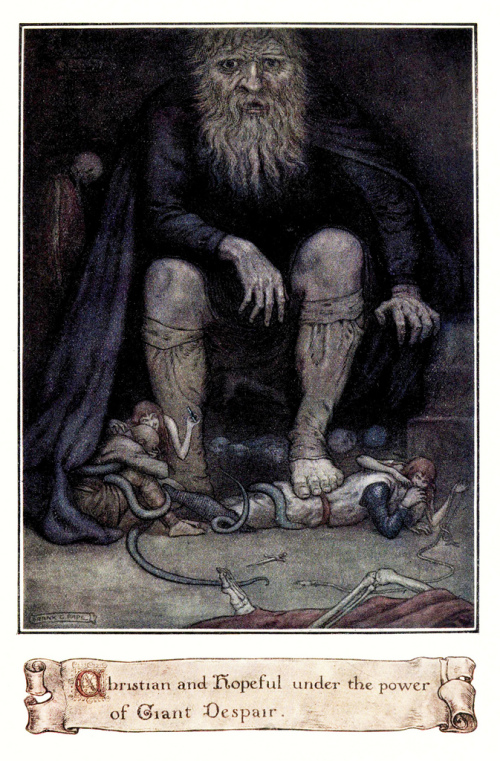 The giant, therefore, drove them before him, and put them into his castle, into a very dark dungeon, nasty and stinking to the spirit of these two men.

Lover and friend hast thou put far from me, and mine acquaintance into darkness. Psalm 88:18

Here then they lay, from Wednesday morning till Saturday night, without one bit of bread, or drop of drink, or any light, or any to ask how they did. They were, therefore, here in evil case; and were far from friends and acquaintance. Now in this place CHRISTIAN had double sorrow; because ‘t was through his unadvised counsel that they were brought into this distress.

Now Giant DESPAIR had a wife, and her name was DIFFIDENCE; so when he was gone to bed, he told his wife what he had done, to wit, that he had taken a couple of prisoners, and cast them into his dungeon, for trespassing on his grounds. Then he asked her also what he had best to do further to them. So she asked him what they were; whence they came; and whither they were bound: and he told her. Then she counseled him, that when he arose in the morning he should beat them without any mercy: so when he arose, he gets him a grievous crab tree cudgel, and goes down into the dungeon to them, and there first falls to rating of them as if they were dogs, although they gave him never a word of distaste; then he falls upon them, and beats them fearfully, in such sort, that they were not able to help themselves, or to turn them upon the floor. This done, he withdraws and leaves them, there to condole their misery, and to mourn under their distress; so all that day they spent the time in nothing but sighs and bitter lamentations. The next night, she talking with her husband about them further, and understanding that they were yet alive, did advise him to counsel them to make away with themselves. So when morning was come, he goes to them in a surly manner, as before; and perceiving them to be very sore with the stripes that he had given them the day before, he told them that since they were never like to come out of that place, their only way would be, forthwith to make an end of themselves, either with knife, halter, or poison: “For why,” said he, “should you choose life, seeing it is attended with so much bitterness?” But they desired him to let them go; with that he looked ugly upon them, and rushing to them, had doubtless made an end of them himself, but that he fell into one of his fits; for he sometimes in sunshine weather fell into fits, and lost (for a time) the use of his hand; wherefore he withdrew, and left them (as before) to consider what to do. Then did the prisoners consult between themselves, whether ‘t was best to take his counsel or not: and thus they began to discourse.

Christian: “Brother,” said CHRISTIAN, “what shall we do? the life that we now live is miserable: for my part I know not whether is best — to live thus, or to die out of hand. ‘My soul chooses strangling rather than life’;

So that my soul chooseth strangling, and death rather than my life. Job 7:15

and the grave is more easy for me than this dungeon. Shall we be ruled by the Giant?”

Hopeful: Indeed our present condition is dreadful, and death would be far more welcome to me than thus for ever to abide; but yet let us consider, the Lord of the country to which we are going hath said, “Thou shalt do no murder,” no, not to another man’s person. Much more, then, are we forbidden to take his counsel to kill ourselves. Besides, he that kills another can but commit murder upon his body; but for one to kill himself, is to kill body and soul at once. And, moreover, my brother, thou talkest of ease in the grave; but hast thou forgotten the hell, whither for certain the murderers go? “for no murderer hath eternal life.” And let us consider again, that all the law is not in the hand of Giant DESPAIR; others, so far as I can understand, have been taken by him as well as we, and yet have escaped out of his hand: who knows but that God who made the world may cause that Giant DESPAIR may die that, at some time or other, he may forget to lock us in? – or, but he may in a short time have another of his fits before us, and may lose the use of his limbs? And if ever that should come to pass again, for my part I am resolved to pluck up the heart of a man, and to try my utmost to get from under his hand. I was a fool that I did not try to do it before; but however, my brother, let us be patient, and endure awhile; the time may come that may give us a happy release; but let us not be our own murderers.

With these words HOPEFUL at present did moderate the mind of his brother; so they continued together (in the dark) that day, in their sad and doleful condition.

Well, towards evening, the Giant went down into the dungeon again, to see if his prisoners had taken his counsel. But when he came there, he found them alive; and truly, alive was all: for now, what for want of bread and water, and by reason of the wounds they received when he beat them, they could do little but breathe. But I say, he found them alive; at which he fell into a grievous rage, and told them that, seeing they had disobeyed his counsel, it should be worse with them than if they had never been born.

At this they trembled greatly; and I think that CHRISTIAN fell into a swoon; but coming a little to himself again, they renewed their discourse about the Giant’s counsel, and whether yet they had best to take it or not. Now CHRISTIAN again seemed to be for doing it; but HOPEFUL made his second reply, as follows:

Hopeful: “My brother,” said he, “rememberest thou not how valiant thou hast been heretofore? APOLLYON could not crush thee; nor could all that thou didst hear, or see, or feel, in the Valley of the Shadow of Death. What hardship, terror, and amazement, hast thou already gone through — and art thou now nothing but fear? Thou seest that I am in the dungeon with thee, a far weaker man by nature than thou art! Also, this Giant has wounded me as well as thee, and hath also cut off the bread and water from my mouth; and with thee I mourn without the light: but let us exercise a little more patience. Remember how thou playedst the man at Vanity Fair, and wast neither afraid of the chain nor cage, nor yet of bloody death; wherefore let us – at least to avoid the shame that becomes not a Christian to be found in – bear up with patience as well as we can.”

Now night being come again, and the Giant and his wife being in bed, she asked him concerning the prisoners; and if they had taken his counsel? To which he replied, “They are sturdy rogues; they choose rather to bear all hardship than to make away with themselves.” Then said she, “Take them into the castle yard tomorrow, and show them the bones and skulls of those that thou hast already dispatched; and make them believe, ere a week comes to an end, thou also wilt tear them in pieces, as thou hast done their fellows before them.”

So when the morning was come, the Giant went to them again, and took them into the castle yard, and showed them as his wife had bidden him. “These,” said he, “were pilgrims as you are, once, and they trespassed’ in my grounds, as you have done; and when I thought fit, I tore them in pieces; and so within ten days I will do to you: go, get you down to your den again!” And with that he beat them all the way thither. They lay, therefore, all day on Saturday in a lamentable case, as before. Now when night was come, and when Mrs. DIFFIDENCE, and her husband the Giant, were got to bed, they began to renew the discourse of their prisoners; and withal the old Giant wondered that he could neither by his blows nor counsel bring them to an end. And with that his wife replied: “I fear,” said she, “that they live in hope that some will come to relieve them; or that they have picklocks about them; by the means of which they hope to escape.” “And sayest thou so, my dear?” said the Giant; “I will therefore search them in the morning.”

Well, on Saturday, about midnight the pilgrims began to pray; and continued in prayer till almost break of day.

Now a little before it was day, good CHRISTIAN, as one half amazed, break out in this passionate speech: “What a fool,” quoth he, “am I, thus to lie in a stinking dungeon, when I may as well walk at liberty! I have a key in my bosom called Promise; that will, I am persuaded, open any lock in Doubting Castle.” Then said HOPEFUL, “That’s good news; good brother, pluck it out of thy bosom, and try.”

Then CHRISTIAN pulled it out of his bosom, and began to try at the dungeon door; whose bolt (as he turned the key) gave back, and the door flew open with ease: and CHRISTIAN and HOPEFUL both came out. Then he went to the outward door that led into the castle yard; and with his key opened that door also. After, he went to the iron gate, for that must be opened too; but that lock went exceedingly hard: yet the key did open it. Then they thrust open the gate to make their escape with speed; but that gate, as it opened, made such a creaking, that it waked Giant DESPAIR:

who, hastily rising to pursue his prisoners, felt his limbs to fail, for his fits took him again, so that he could by no means go after them. Then they went on, and came to the king’s highway again; and so were safe, because they were out of his jurisdiction.

Now when they were gone over the stile, they began to contrive with themselves what they should do at that stile, to prevent those that should come after from falling into the hands of Giant DESPAIR. So they consented to erect there a pillar, and to engrave upon the side thereof this sentence: “Over this stile is the way to Doubting Castle; which is kept by Giant DESPAIR, who despises the King of the Celestial Country, and seeks to destroy his holy pilgrims.” Many, therefore, that followed after, read what was written, and escaped the danger. This done, they sang as follows:

“Out of the way we went; and then we found
What ‘t was to tread upon forbidden ground:
And let them that come after have a care,
Lest heedlessness makes them, as we to fare;
Lest they, for trespassing, his prisoners are,
Whose castle’s ‘Doubting’ and whose name’s DESPAIR.” 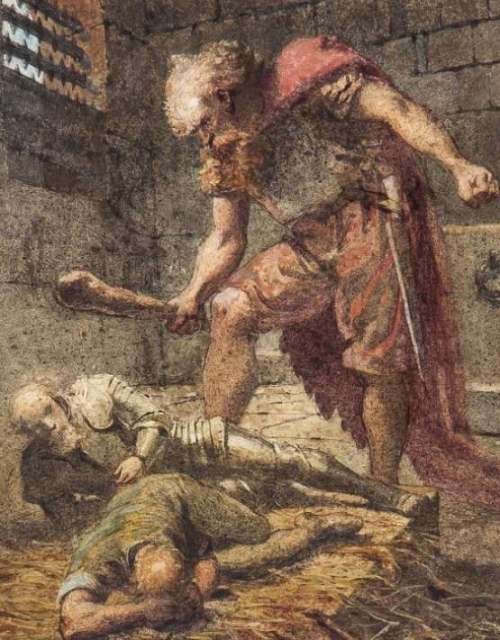